I recommend QGIS (formerly “Quantum GIS”) to enough people that it is useful to post my standard instructions. There is an official QGIS download page, but it is short on guidance where there are choices to make…

…except for Mac. If you are using a Mac, just download the binary from KyngChaos. Make sure to install any packages listed under “Requirements” first. As of Jan 2014, the installation protocol is:

The particular installation instructions may change as QGIS develops, and William Kyngesburye does a good job of keeping the downloads current, so please check out the links and assume that anything on KyngChaos supersedes anything I’ve written here.

For Windows your choice is between the “official” QGIS install and the OSGeo4W (Open Source Geo for Windows) installer. I would recommend using OSGeo4W. It comes with a variety of open source geospatial software, which you can pick and choose, or just use the Desktop Express Install (which will install the most recent version of QGIS). The installer follows the Linux model in that the software are tightly integrated with their dependencies, so you will get recent versions of GDAL/OGR, GEOS, and PROJ, three libraries that undergird the entire open source geospatial ecology.

I’m only familiar with Ubuntu-based distros, so for other distros consult these instructions. For Ubuntu, the instructions at that link are unnecessarily ecumenical. There is no reason not to use the ubuntugis-unstable PPA, which, in spite of its name, is quite stable, and as far as I can tell is what everyone is using. For ease of reference, I repeat the instructions here. In the terminal:

Another option if you want a full operating system loaded with geospatial software is the OSGeo-Live DVD. This is a Lubuntu-based operating system that you can run in a virtual machine (I recommend VirtualBox). OSGeo-Live 8.5 has has a recent version of QGIS built in, but it is also linked to the ubuntugis-unstable PPA, so when you run software updates it will upgrade you to the most recent version.

For people new to QGIS, there are many helpful resources online, but two noteworthy sites are hosted at Baruch and Harvard:

I have used the Baruch one with my students in the past, and it is very good. It is almost a mini-textbook in GIS, with a lot of supporting text that explains the what and why of what you are doing in the software. The Harvard one I only recently became aware of. It is more point-and-click with less explanation, but it also has YouTube videos of each of the lessons.

One of the reasons QGIS is such an amazing software is because of the rich ecology of third-party plugins. Strong plugins which become widely used eventually find their way into the core application, further contributing to the pace of development.

Plugins are installed and enabled by the Plugin Manager (Plugins→Manage and Install Plugins…). Plugins which are already installed are not available for use until you check the box in the list of installed plugins (see screenshot). Then they are added to the QGIS menus and toolbars. Some plugins will appear in their own top level menus, some will appear in another top level menu (e.g. Vector or Raster), and some will just appear as a new menu item in the Plugins menu itself. You may have to hunt around. To install new plugins, just click on Get New in the left pane of the Plugin Manager. Click a plugin name to see a (usually overly brief) description in the right pane, and click the Install plugin button in the lower right to install. 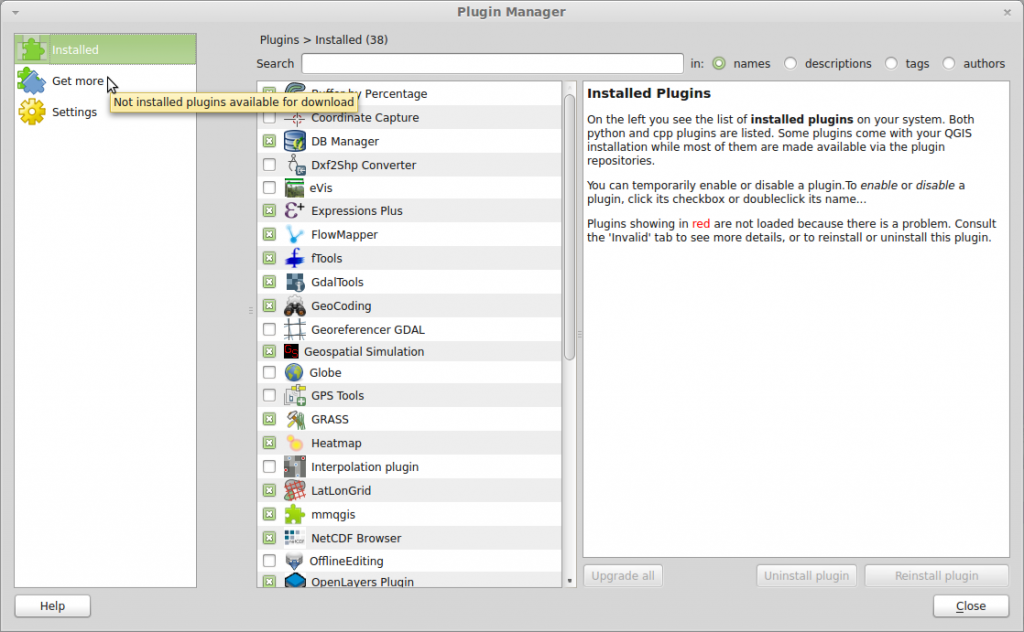 Here are some plugins that I think are worth installing immediately:

This entry is licensed under a Creative Commons Attribution-NonCommercial-ShareAlike 4.0 International license.